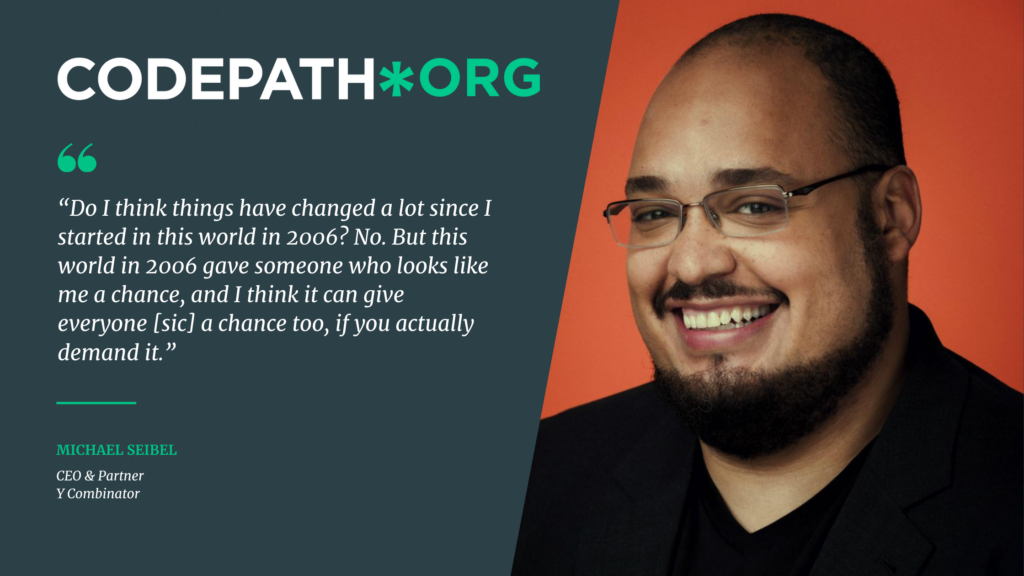 CodePath.org is proud to present a curated series of fireside chats with leading African American technology, venture capital, non-profit, and entrepreneurial leaders. Designed specifically for our students, these discussions were hosted throughout the summer of 2020. This is an interview with Michael Seibel, CEO and Partner at Y Combinator.

“Don’t give up. Like, if somebody says no, f*** them.” And so begins Michael Seibel’s fiery, raw, hilarious, engaging, relevant, and refreshingly honest conversation with CodePath’s co-founder and CEO, Michael Ellison. “Refreshingly honest” is a good descriptor for Seibel, who has advised hundreds of startups, including such prominent companies such as AirBnB, and was recently named the first Black board member of the immensely popular discussion site Reddit.

But perhaps a better word for Seibel is — unconventionally — “real.” For someone with such an impressive resume, extensive experience, and, truthfully, a ton of money, Seibel brings an unusual degree of authenticity to his presentation of the tech world and, particularly, startup culture, and it’s precisely this trait — his unnerving realness — that makes his advice to young people, students, and aspiring entrepreneurs all the more valuable.

Read on to find out why Michael Seibel doesn’t believe in mentorship and how success can sometimes feel like getting punched in the face every day.

On defining moments that shaped his future

Seibel says there were three big moments in his life that paved the way for future success. The first, was early on, when he was still in high school, a self-identifying “middle honors” kid. Then he took a government class that he really liked, a class that all of the smartest, most accomplished students were in. “I remember realizing that I was just as smart as these people, and so why wasn’t I trying to be? Why wasn’t I competing harder? Why wasn’t I taking harder classes?”

The second moment came upon arriving at Yale, a school many would argue is the most elite secondary education institution in the country. Seibel says he looked around and realized that the top fifty kids in his high school were interchangeable with just about anybody at Yale. “It made me really understand how many people who were just as good as the folks around me at Yale weren’t there. And that was really surprising to me. Yale was significantly less hard than my high school. So the brand thing really kind of got broken.”

The third big moment was, interestingly, when Seibel got himself kicked out of Yale. He reflects, “this kind of disillusionment with Yale caused me to stop participating in classes, not get good grades, and I was actually kicked out. And that was funny. That was the moment where it was like, okay, life has consequences. Like, these were easy classes. You didn’t do well in easy classes, and now life’s gonna punch you in the face. What are you gonna do about it? …I really needed that.”

These three defining moments would lead Seibel to increase his effort output — “climb back up,” in his words — and study hard, eventually graduating. These moments also led him to befriend Justin Kan, with whom he would later found Justin.tv, which eventually evolved into a project called Twitch, and most of us already know how that story ends (if you don’t: Twitch Interactive sold to Amazon for $970 million dollars).

Seibel equates, to a certain degree, succeeding in the startup world to getting punched in the face every day. And while he doesn’t believe in mentorship (“I always think, in the back of my head, who taught Michael Jordan how to become Michael Jordan?”), he places great value on the importance of having a team. Your co-founder, your fellow team members, those are the people who will go to war with you. They’re experiencing what you’re experiencing, which, unfortunately, when you’re founding a startup, Seibel says, feels pretty much like getting punched in the face every day.

“Doing startup is so hard, and a lot of the value of having a co-founder is that they’re there to help you through the hard times,” Seibel notes, adding that most founders don’t approach startup culture in the right way. They think about building a company as though they’re building a machine, and when it’s not working, they think they need to replace different parts of the machine. “They forget the emotional component,” says Seibel. “Like, getting punched in the face every day isn’t fun, and if you and your co-founder are not close, you can’t support each other as you get punched in the face every day.”

On being an underrepresented minority in the tech world

“A lot of the talk about the disadvantages of being an underrepresented minority in the startup world,” Seibel argues, “is counterproductive. What I don’t see it doing is inspiring people to achieve more….What I see it doing is scaring people into not trying. So I think the intention is correct, right? But the outcome is not great.”

Seibel recounts a story about a recent Zoom call he participated in with the Black founders who are in the current Y Combinator (YC) batch. He invited a guest, a former YC founder, named Phaedra Ellis-Lamkins, who has founded a company called Promise, which makes it easier for people to pay their bills and avoid unnecessary jail time. Seibel speaks incredibly highly of Phaedra, and in particular, highlights her message to young minorities who are trying to succeed in the systematized tech world.

“The number one message that she communicated to folks in the batch,” he recalls, “is that, just to get this far, you’re already special. You should be betting on yourself, because you’ve already distinguished yourself. You can probably already do more than many of the people around you, and so you should be aspiring for more; you should demand more; you should be confident.”

Seibel sees the message being shared is that, “money doesn’t go to Black people and it’s an injustice, because the system’s run by a bunch of racists. Like, whether that is true or false, for the Black people who will create successful startups,” he asserts, “if the takeaway from that message is, ‘well, I guess the system won’t fund me, so I shouldn’t do it,’ it’s ridiculously counterproductive.”

“Do I think things have changed a lot since I started in this world in 2006? No. But this world in 2006 gave someone who looks like me a chance, and I think it can give everyone [sic] a chance too, if you actually demand it.”

Demanding it, according to Seibel, is a big part of what it takes to succeed in the oftentimes ruthless startup environment. “This isn’t like school,” he makes sure to mention, “this isn’t like high school. This isn’t like your parents. No one’s going to offer you a chance. You have to demand it.”